In light of the holiday season that is slowly sneaking up on us (crazy), today I thought that I would talk about a product that may be helpful if you want to create a sparkly eye look for Christmas and/or New Year’s.

Glitter makes everything more fabulous.At least that is what I always thought until I came across makeup with glittery chunks. I love me some sparkle, but find myself rarely reaching for shadows with glitter chunks in it. To begin with, there’s too much fall out to deal with, and second, there are just not very many opportunities as an adult to wear glitter.

I bought the Too Faced Glitter Glue about a year ago in the hopes that it would decrease fallout in some of the glittery shades that came in palettes I owned. Today I wanted to do a review of how well this product works by testing it out two different ways: with swatches and on my eyes. In both tests, I first used no base, then the Urban Decay Primer Potion (which wasn’t made to be used with glitter shadows), and then the Glitter Glue. The eyeshadow I have chosen to use as the test is Urban Decay Provocateur from the original Vice Palette, which is an abysmal glitter bomb.

Without any type of primer, the payoff is sheer in the swatch and the glitter disperses everywhere. With the Primer Potion, the colour is quite a bit more concentrated. With the Glitter Glue, the pigmentation is by far the strongest, and the shade came out more metallic than with the UDPP and no base.

As you can see, there is a ton of fallout when you don’t use a base under Provocateur. Some of it happened during application, but when I looked in the mirror twenty minutes after first applying it, there was even more glitter than before. This is the worst thing about using glitter. If you get fallout while applying the shadow, it’s not a huge deal because you can use a brush to brush it off, or take a little bit of scotch tape, tap it to the back of your hand a few times so it becomes less sticky, then use it under your eyes to get rid of the glitter. However, it becomes a problem when glitter falls throughout the day. 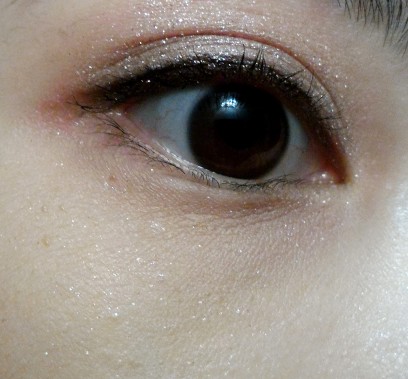 With the UDPP, even though it’s not specifically made for use with glitter, I was surprised by how much fallout there was, as the swatch had looked so promising. Again, some of the fallout occurred during the application process, but most was from post-application. UDPP is not designed to make glitter stick, so while it would’ve been nice for it to work, I’m not disappointed.

With the Glitter Glue, there was virtually no fallout during the application process. Post-application, there were a couple of flecks of glitter under my eyes, but it was very minimal. The concentration of colour is a lot stronger on the lids, too.

Have you tried the Two Faced Glitter glue yet? What did you think?