Apologies for not posting regularly lately – things have been crazy. This post was supposed to go up on Tuesday, but time ran away from me!

Deborah Lippmann Happily Ever After Set

I was given these polishes (Going to the Chapel, Something Blue, Endless Love) as a gift a few years ago. I thought this wedding-themed set was so cute. I wanted so much to love them, but the finish on these is so weird. They have a matte finish, but the polish itself contains a sheen. Sounds like a nice idea, but they made it look like I painted my nails with chalk, especially the white one. I tried these a few times, and even tried to put a topcoat on top to make it shiny instead of matte, but it just doesn’t work. 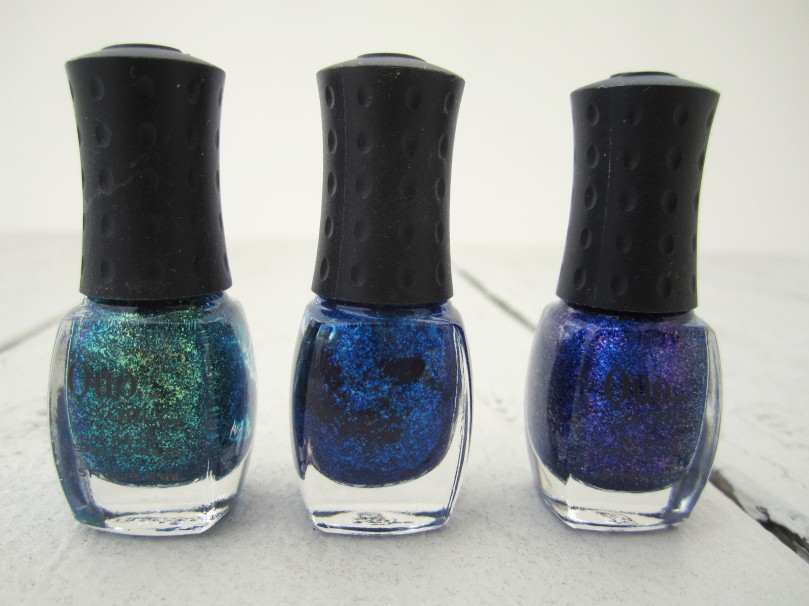 These were minis that came in a holiday yet many, many years ago. I threw out 90% of the polishes from this set, but kept these three around because the formula was still good and the shades are quite unique (I still love that teal shade with the green and yellow shimmers). However, I don’t wear these shades…ever. There’s no point in keeping them around if I never wear them, so it’s time for them to go.

Butter London Polishes
These three polishes (Pillar Box Red, Trout Pout, Buckie) also came in a set. I’m throwing away Trout Pout and Buckie because I never use them anymore. I have worn them several times, and Buckie is actually quite a unique shade, as it’s a metallic purple with a greenish shift; however, it’s not flattering on me at all. I am throwing away Pillar Box Red because I literally own 10 polishes that are the same fire-engine red shade, which I rarely ever wear. 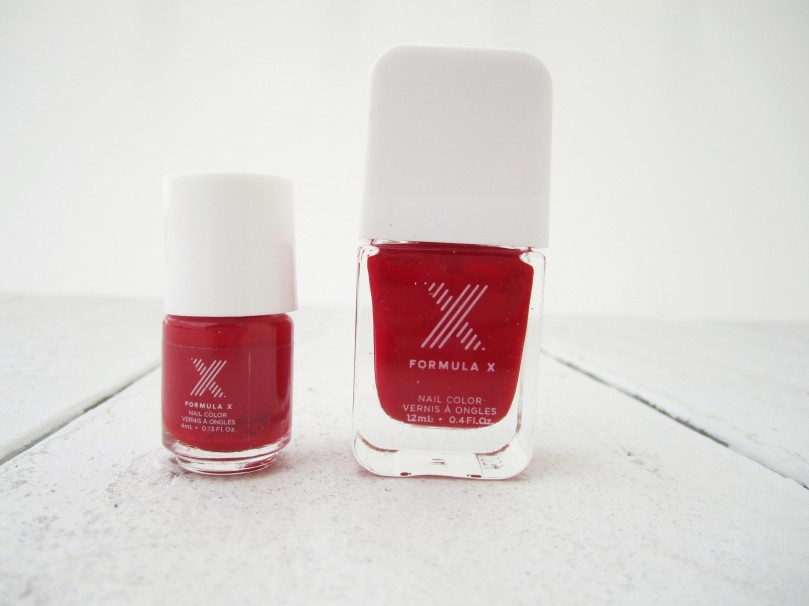 These two polishes are the exact same colour, the fire-engine Formula X ♥ Rouge shade. One of them my friend gave me; I believe it was the gift that year when you achieved Rouge status. The other came from a gift set of minis. Again, I have too many of these reds and I never use them.

Does anyone remember when Sephora carried these, before they came out with the Formula X line? I had the shades Studs & Stilettos, Mauve-ie Star in the Making, and Only Gold for Me. My friend bought Studs & Stilettos for herself but didn’t like it, so she passed it onto me. Not sure why I took it, because it’s a straight-up brown with a subtle shimmer, which I have never worn. You can tell that I loved Only Gold for Me, but I’m trashing it now because it’s gotten old and goopy, and I rarely wear top coats anymore anyways. When they were getting rid of the Sephora by OPI line, I also bought Mauve-ie Star in the Making in hopes that I would love it just as much, but I didn’t. This is why it’s going in the trash.

I bought these two babies at a fair for around $5, even though I’ve never heard of the brand. They were both rather thick and goopy right off the bat, although I tried so hard to use that Kleancolor Nail Lacquer shade, which is called Rain in Blueberries (huh?), but it was too goopy to work with. It’s a super pretty dusty purple with yellow duochrome. Also, the packaging lies, it doesn’t smell like blueberries. The Fascino polish is a pretty shell pink – nothing too unique. 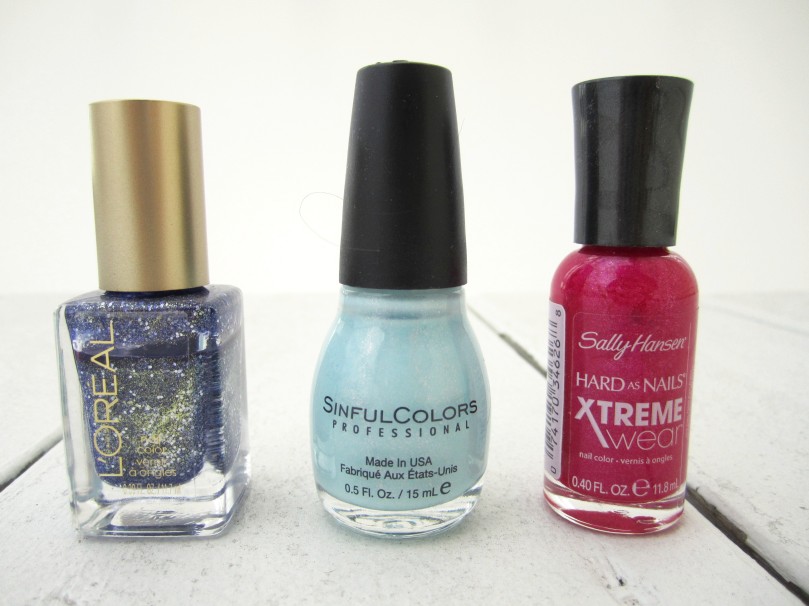 L’Oreal Color Riche Gold Dust polish in Too Dimensional? – I bought Too Dimensional? on a whim. Turns out that these were textured polishes and the glitter is bumpy, which I hate. You can see swatches, which show the texture, on All Lacquered Up. I actually used a fair bit of this polish – I tried using a top coat to smooth out the texture, but the shade is still nothing special.

Sinful Colors polish in Cinderella – I bought Cinderella earlier this year. I wore it once and it does not look good on me at all! It was only $1.99, so I don’t feel TOO bad throwing it out.

Sally Hansen Hard as Nail Xtreme Wear polish in Hot Magenta – this is a favourite of mine. You can’t tell, but I was almost halfway through the bottle. However, it’s getting old and goopy, so it needs to go.

Revlon Nail Enamel in Charming – This is so old, it’s not even funny. I wore this A LOT back in the day, but now that I have a better sense of what looks good on me, I don’t find this flattering on my skintone. Plus, it’s old.

Color Club polish in Kismet – this is a serious holo polish, but I don’t wear it much because I don’t love the yellowy-bronze – I would’ve much preferred their other holo shades, but this was the only one available at Winners at the time.

Maybelline Colour Show polish in Coral Crush – At the time, I was looking for a peachy coral, and thought this might be a good one. It’s actually a bright coral. I have worn it numerous times, but I haven’t worn it much in the last two years as I don’t really wear brights anymore.

Wet n Wild polish in Grey’s Anatomy – also a really cool duochrome, and looks awesome over black, but again, this is getting old and I don’t wear it anymore.

In total, I threw away 26 polishes. This doesn’t seem like a lot, but I didn’t own a lot of polishes to begin with – it’s almost half my stash! Does this mean I can replace these 26 polishes with new ones? I think so!