To be honest, I bought this product with a healthy dose of skepticism, because I’m not a fan of cream highlighters and probably would not have given this a second glance if it hadn’t been 50% off at Sephora during one of the Weekly Wow sales back in October. I’m not usually one to buy things just because they’re on sale, but discounted highlighters get me every time!

The Becca Shimmering Skin Perfector Poured highlighter retails at $46 CAD for 0.20 oz, in contrast to their pressed formula, which comes in 0.25 oz for $46, and their liquid formula, which retails at $50 for 1.5 oz. Becca offers the same shades across all of their Shimmering Skin Perfector formulas, but you will see below that they are all meant to be different finishes. The Poured version is made in Germany.

This is the part where I list out where you can find the highlighter, but in this case, Becca seems to be is discontinuing the Poured formula so I’m not sure if there’s a point. It is currently marked down by 50% on the brand’s official website (with only three shades left), and was also 50% off at Sephora earlier in the year, although it no longer shows up when you search it. I’ve tried Googling to see if anything came up about this product being discontinued, and also tried to ask the brand on Instagram, but I never received a reply and haven’t been able to find any information online.

On the Becca website, the Poured highlighter is described as “A sheer, creamy highlighter that creates a subtle luminosity, and a smooth, sophisticated glow”. This is compared to the liquid formula, which is supposed to give you a dewy finish and natural glow, as well as the pressed formula, which will give you high, ultra-reflective shine.

Similar to the other Becca highlighters in the regular line, the Poured highlighters are housed in a sleek UFO-looking compact with the brushed metal in the middle and a rubberized brown edge, which tends to collect a lot of shimmer (for me at least). As you can see in the photo, the compact of the Poured version is actually a lot smaller than that of their pressed formula, even though the pressed version does not contain that much more product!

The biggest gripe I have with cream highlighters in general is that I find them very difficult to use. I feel like I often have issues blending them out on my cheekbones, resulting in a shimmery stripe across my face. I don’t often have a strong reaction to makeup, particularly after only trying it once, so imagine my surprise when I started using this highlighter and fell head over heels for it. In fact, I have to say that it beats out the pressed formula for me, which has been my favourite highlighter that I’ve discovered so far. That’s a bold claim! 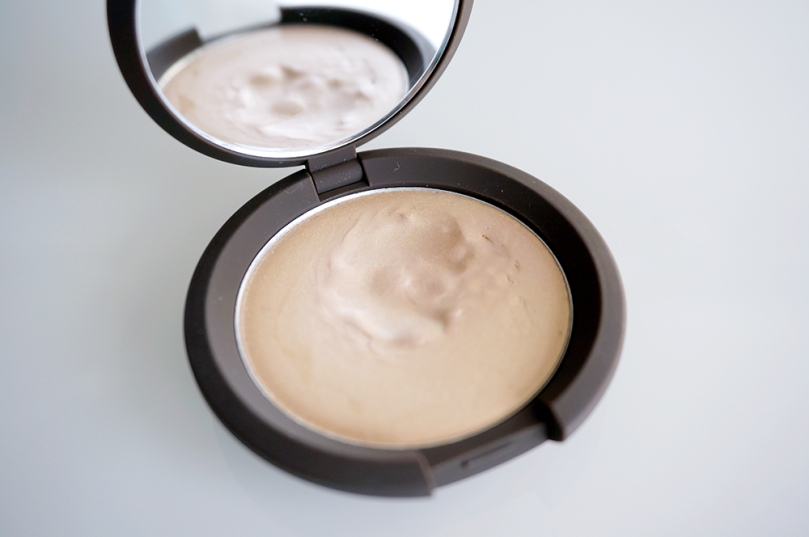 “Poured” isn’t really an accurate name, in my opinion. Yes, it’s definitely a cream product, but the name makes me think of a highlighter with a very creamy, emollient texture. That’s not how I would describe this highlighter, which is stiffer than you would think and almost has this dry powdery-ness to it. Words like “stiff, dry, and powdery” aren’t really words you would ever want to use when describing your makeup, but somehow it works. It’s not the same as the Super Shock Highlighters, which is more silky.

The formula of this highlighter is much too stiff to be able to use with most brushes, but I imagine that a very dense stippling brush may be able to get the job done. I’ve found that the best (and recommended) way to apply this highlighter is with your fingers. I swirl my ring finger around the product, and then I swipe it along my cheekbone area. Using my middle and ring finger, I then blend it all out, and the highlighter is so easy to work with and blend out. Rinse and repeat, until I get my desired amount of glow.

The reason I like the Poured formula more than the Pressed version is because of how much control you get when it comes to the amount of glow you want. The brand is correct in saying that the Poured version gives you subtle luminosity. One layer will give you a slight sheen, otherwise you can get a more glam glow if you add on more layers. On the other hand, the pressed versions give you a very reflective glow right off the bat unless you go in using a very light hand. The sheen on the Poured version is more pearly, whereas the Pressed version is more shimmery.  Funnily enough, the poured and pressed versions look similar when swatched, but they definitely have two distinctive finishes when applied to the cheekbones.

This cream highlighter doesn’t disturb the foundation underneath it when I apply with my fingers, which is another problem I often find with cream highlighters. However, one think I would like to point out is that I don’t like having to dip my fingers into the product. Considering it’s a cream product, I feel like it’s especially easy for oil and dirt to stick to it.

I was quite impressed with the staying power. After wearing it for about 11 hours, I come home from work with still a hint of a glow on my cheekbones, although it’s slight and nowhere near as strong as it was when I first applied – I do feel like the Pressed version has a stronger highlight at the 11-hour mark. Like most cream products, I feel like this will likely be more long-wearing on those with dry skin (like me) than those with oily skin.

Here are comparison swatches of Moonstone in the Poured formula with two of my other favourite champagne highlighters – the Balm Mary Loumanizer and the Becca Pressed formula in Opal – they look the same in the sheered out swatches but I swear they’re different – I swear!

While Opal is darker and pinker than Moonstone, Mary Loumanizer is almost an exact dupe. By the time I realized these were on sale, all except the lightest and darkest shades were sold out on the Sephora website, and this was the only colour left in stores that would flatter my skintone. I knew that Moonstone would be quite similar to these two shades, and given the choice, I would have picked up a significantly different shade, like Rose Gold. I’m really sad that we can no longer get my hands on this formula! This deserves to be way more hyped up than it was.

In summary, I was pleasantly surprised by this highlighter and how easy it was to use. I rarely say this about anything, but it was love at first sight! What’s your favourite highlighter formula?