Happy Friday, everyone! Today’s post is a review of another highlighter – probably because I’ve been buying too many of them lately 😂 This review is of Becca’s Shimmering Skin Perfector Pressed in the shade Parisian Lights, which was added to my collection about a month and a half ago. I usually like to use products for a bit longer before I review them, but I believe this is a limited edition release, so I wanted to get a review out in case anyone out there is still contemplating getting this highlighter. Honestly, I don’t think I’ve actually seen any reviews of this highlighter myself.

I’ve mentioned before that I’ve loved Paris since I was a little girl, which I think stemmed from my love of the cartoon/books Madeline. I loved the city when I visited about 10 years ago, and now the city holds special meaning to me as it was one of the places we visited on our honeymoon. I’m not usually one to make impulse purchases, but the minute I saw this highlighter announced on Instagram back in January, I wanted to get my hands on it. Unfortunately, I found out that I wouldn’t be able to just walk into a Sephora to buy it, so I had to look at the other sources.

While this highlighter is available at Sephora France, other countries could only get it on Beautylish, Cult Beauty, and the Becca website. I decided to try Beautylish since I’ve heard quite positive things about ordering from them. Before I begin the review, I’m going to quickly go over my experience ordering from them.

I placed my order the morning of Monday, February 19th, and it was shipped out the same day. My package arrived on Tuesday, February 27th, so it only took a just over a week to receive it – not bad, Beautylish! The package arrived in a cardboard shipping box, and inside was this black Beautylish box, which seemed ridiculously big to me considering the size of a highlighter. The box was filled with kraft paper, and between all this kraft paper was the highlighter wrapped in of tissue paper. The precious cargo inside was more than well protected!

Before placing my order, I had read in the FAQs that customs/duties are calculated at checkout. I love it when companies do this, because it saves customers from getting a nasty surprise when the package arrives and they find out they owe duties fees. Shipping on Beautylish is free for any purchases over $35 USD. This highlighter was $37 USD, so it just passed the minimum requirement. I ended up being charged only $1.50 for duties, which was totally acceptable to me. The total came to $40 USD, which translated to $50 CAD. This ended up being not far off from the $48.50 CAD I would have paid buying it from Sephora. Overall, I had a very pleasant experience ordering from Beautylish, and I would absolutely do it again. 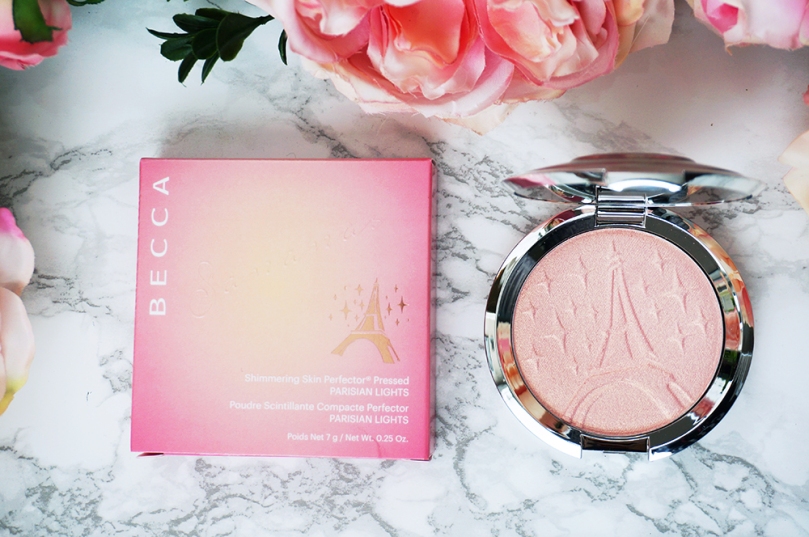 Now, back to the review! The Becca Parisian Lights highlighter is a limited edition highlighter released in collaboration with French beauty influencer Sananas. I had never heard of Sananas before this, which isn’t unusual these days – there are so many Instagram influencers out there to keep track of! 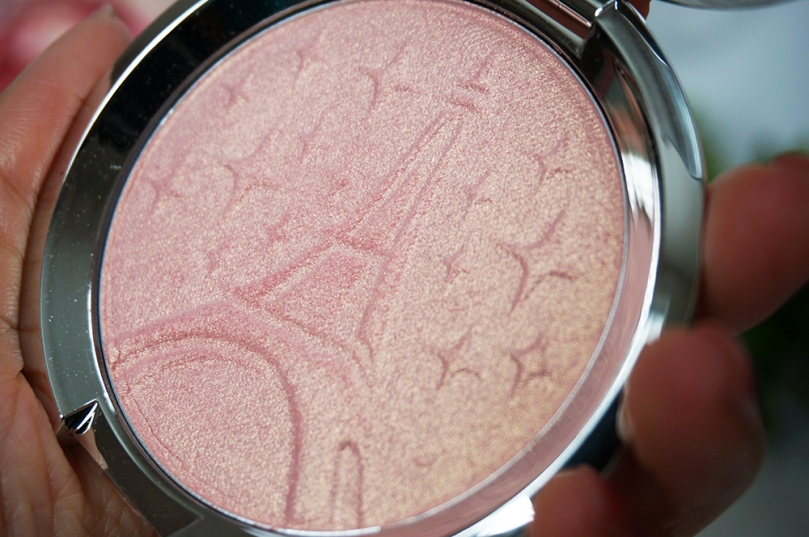 This highlighter retails for $37 USD for 0.28 oz, is made in the USA and is available for purchase on Beautylish, Cult Beauty, the official Becca website, and Sephora France.

The highlighter is packaged in a peach-pink cardboard box. The compact itself is the same size as the highlighters from its permanent collection, but the Parisian Lights compact is silver all around, compared to the usual highlighters that come in the rubberized brown compacts. I kind of wish they would have made the compact pink, but at the end of the day it doesn’t matter that much.

As I mentioned above, Parisian Lights is a peachy-pink highlighter with gold shimmers. Although the Eiffel Tower design played a big role in my purchase of this product, I was super excited about the shade and would not have purchased it if it were in a shade I disliked or already owned. The peachiness is right up my alley! Overall, the highlighter gives a warm glow, although I think it would look beautiful whether you have a warm or a cool skin tone. I do think this shade might be too dark for those with extremely fair skin, though. 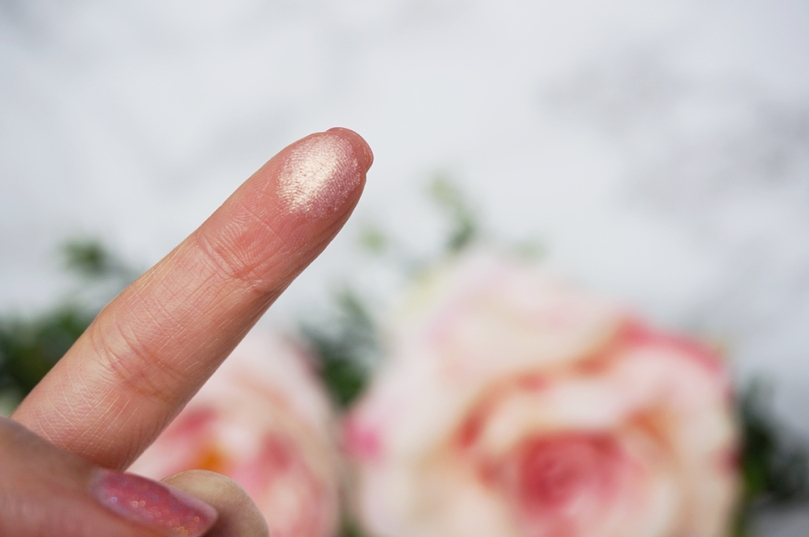 Most people who have tried any of the Becca highlighters know exactly how metallic and pigmented they are, and this one is no exception. I do feel like my other pressed Becca highlighter (Opal) feels more buttery and smooth, but overall it doesn’t seem to negatively affect the performance of Parisian Lights. I use a wispy fan brush to gently pick up the smallest bit of product, and it gives my cheekbones a noticeable glow – not subtle, but not too intense, either. Of course, if you pick up more product or use a denser brush, the glow will be crazy!

I would say this lasts about a solid 7 or 8 hours on my dry skin before starting to fade on my skin. If I look at my face in the afternoon, I can still see a subtle glow, but when I come home from work after wearing this shade for about 11 hours, I would say the highlight is barely there, if at all. Honestly, this is okay with me, as I don’t expect highlighter to hang in there perfectly until the end of the day.

I find highlighters really difficult to capture on camera – I’m never is able to get the intricacies of the shades. In Parisian Lights, it doesn’t capture the pink-gold shift that is so strong in real life.

As a note, I’ve seen a number of people saying that it’s quite similar to Becca’s Rose Quartz and Lilac Geode – namely this Reddit post. I don’t have the other two highlighters so unfortunately I can’t do comparison swatches or attest to the similarity. Online, there are some differences between the three, but they do seem to look very similar – I wouldn’t say you’d need all three (or even two) of these. On Sephora Canada, Rose Quartz is available but Lilac Geode seems to be gone now, so this might be a decent stand-in if you had missed out on Lilac Geode.

-Expensive
-Not as readily available as most Becca highlighters

Honestly, I found this highlighter a little difficult to review because it isn’t all that different from all of Becca’s highlighters in terms of performance. If you’ve tried one, you know how good they are. What highlighter have you been loving lately?